Various brain conditions can cause the general symptoms that dementia is known to cause. These symptoms are typically memory loss, problems with speaking, and movement problems. These brain conditions can often exist simultaneously, making people often put them under one term, ‘dementia.’ Therefore, it is essential to understand these conditions that can lead to dementia separately. One such series of conditions falls under the term fronto temporal dementia. These conditions typically affect the temporal and frontal lobe areas of the brain. 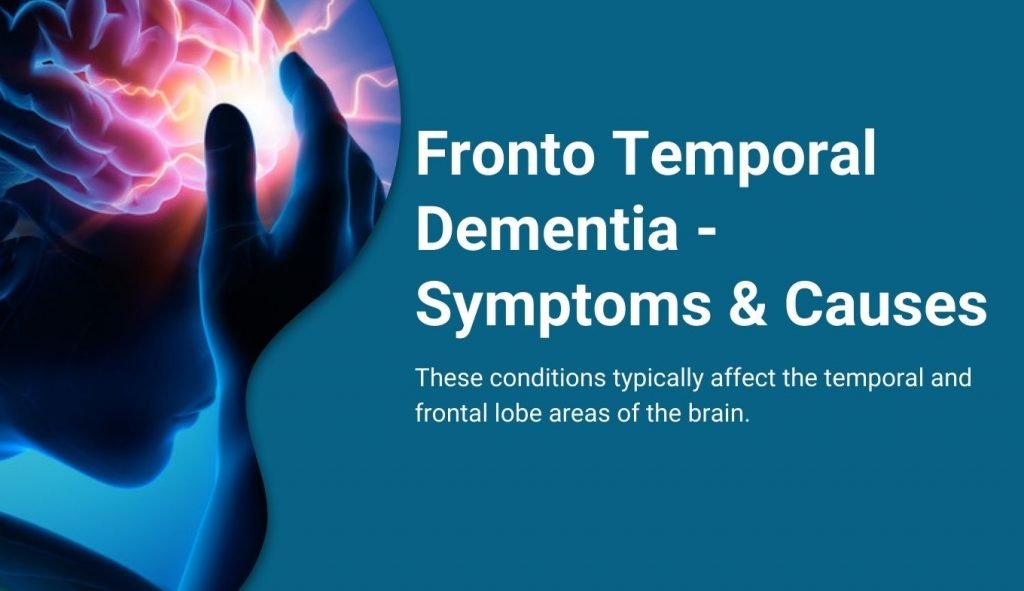 As a result, we will be discussing this dementia type on this page. It can be helpful to understand it if you suspect that your loved one may be showing symptoms of dementia. You can then identify what type of dementia it is and take action accordingly. Therefore, we will be discussing various signs of frontotemporal dementia. We will also be identifying different frontotemporal dementia causes so you can understand what possible risk factors there are.

Without further delay, let’s dive in.

What is frontotemporal dementia?

It basically refers to the brain conditions that affect the frontal and temporal lobes of the brain. If you don’t know where these are, they are the areas of the brain behind your forehead (frontal) and your ears (temporal). These areas of the brain are typically associated with functions that pertain to language, behavior, and personality. The frontal lobes control the part of the brain that deals with planning, choosing, keeping track of, and adjusting. On the other hand, the temporal lobes control all actions related to language and its understanding. As a result, frontotemporal dementia symptoms are those that cause deterioration of these aspects.

Typically, these areas of the brain will shrink with this dementia, leading to nerve cell damage and loss of functions. This fairly uncommon type of dementia is generally a sign of early dementia. This is because it affects most people between the ages of 45-60, compared to other kinds of dementia. Overall, it tends to be about 10-20% of all dementia cases. At times, this dementia can be misdiagnosed as another dementia type or even mental problems due to the similarity of symptoms. With the correct Dementia Diagnosis, the correct type can be identified and can be addressed on time.

What are the symptoms of frontotemporal dementia?

Typically, frontotemporal dementia signs and symptoms will vary for individuals depending on various factors. This includes how much the lobes have been affected and other brain disorders. Additionally, these symptoms will progressively worsen over the years like other dementias. For the most part, it may share symptoms with other dementias. However, memory loss may not be a part of the early signs of frontotemporal dementia, as with early Alzheimer’s disease. The symptoms are:

Typically, these are the most common symptoms of frontotemporal dementia. You may likely see adverse changes in mood, behavior, and personality. This is because the frontal and temporal lobes of the brain control these aspects. Some of the behavioral changes you may likely see are:

A few types of brain disorders related to frontotemporal dementia can cause problems with movement. These are similar to those caused by Parkinson’s disease and ALS. These symptoms are:

Typically, it is difficult to ascertain the specific cause of this type of dementia. There is still research required, but researchers have narrowed down some causes of frontotemporal dementia. These are:

Certain conditions can cause abnormal proteins to clump inside brain cells. These proteins are typically the protein tau and the protein TDP43. It is still unknown why they prefer to collect in the frontal and temporal lobe areas. All that is known is that they somehow cause damage to nerve cells which can affect how they function. Eventually, this can lead to the frontal and temporal lobes deteriorating and shrinking. As a result, frontotemporal dementia can develop within the brain.

It is believed that around one-third of all frontotemporal dementia cases are caused due to genetic mutations. It is still not understood why this happens, but the data shows a trend here. Therefore, if there is a history of this dementia in the family, it is ideal to consult a professional, like a doctor or geneticist. Extensive genetic counseling and testing are available to deal with the chances of frontotemporal dementia occurring.

Researchers have found this type of dementia is similar to other conditions like ALS. This is because there is a similarity in the genetics and molecular pathways, which means there is a connection. However, more research needs to be conducted to form meaningful reasoning of why this is so.

Various brain conditions can contribute to what we know as dementia. One such condition is frontotemporal dementia, which is caused by the shrinkage of the frontal and temporal lobes of the brain. This can lead to nerve cell damage which eventually causes dementia to develop. This is because these parts of the brain are responsible for controlling executive functioning and language in the brain. As a result, the symptoms of this dementia are related to these abilities.

This dementia is uncommon and occurs in earlier stages than other dementia types. Additionally, it can be caused due to clumping of certain proteins and genetic mutations. With proper dementia care, you can identify early stages as well as care for your loved ones. We hope this article has been insightful and helps you look for any of these symptoms in your loved ones. If you suspect that they have these symptoms, you must consult a professional as soon as possible. Thank you for reading!