As we have seen on the previous page, dementia is a progressive disease that goes through various stages of progression. In a sense, dementia is a culmination of several different conditions that can affect other parts of the brain. Dementia is generally known to cause memory loss, but these conditions cause deterioration in different parts of the brain. We have seen in previous articles how there are different types of dementia. We have touched on some of the more general dementia symptoms that pertain to each of the various stages of dementia. 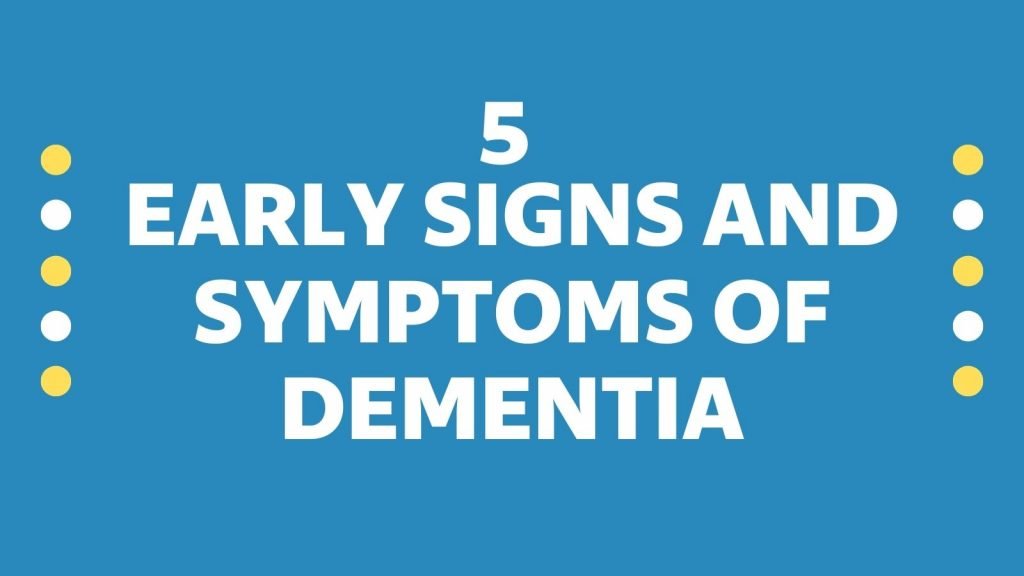 However, we have not looked at the symptoms of dementia when it comes to each dementia type, including the warning signs of early dementia. Understanding these is crucial because it can help you detect the beginning symptoms of dementia in your loved ones. You can then get treatment for them before things get much worse.

But what are the beginning signs of dementia? Without further delay, let’s dive into the signs and symptoms of dementia.

What are the symptoms of dementia?

Suppose you have seen any of these dementia signs and symptoms in your loved one to any degree. In that case, we recommend taking them to a medical professional or doctor to get them diagnosed. Dementia is a treatable disease, but its causes need to be identified first. The earlier you get it diagnosed, the better.

What are the warning signs of dementia?

Now that we have looked at the general symptoms, it is time to look at the early signs of dementia. Doing so will help you understand what you should be on the lookout for if you suspect that your loved ones have dementia. These are: 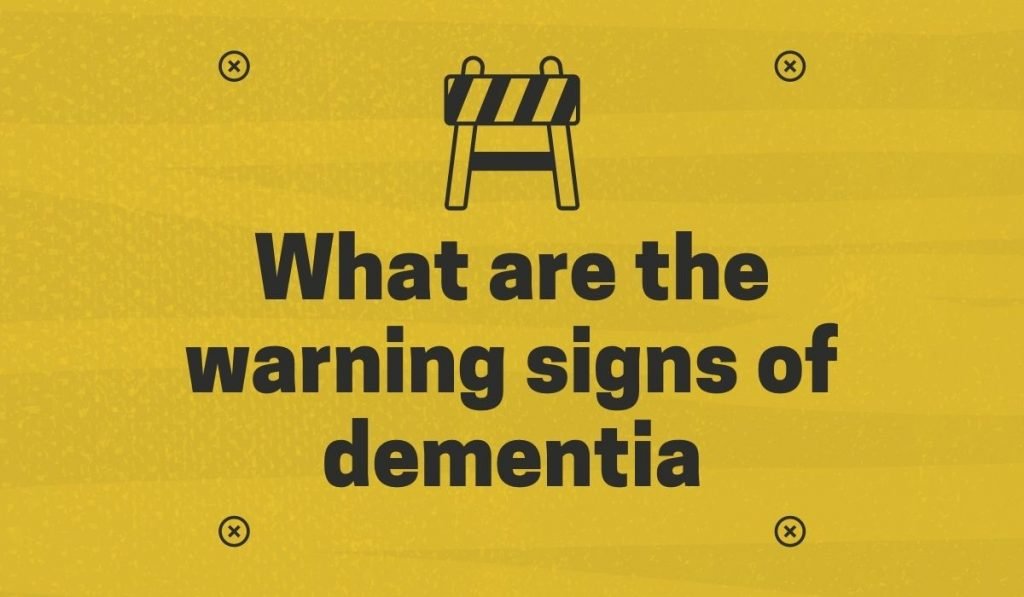 This is among the earliest signs of dementia as it starts to show its effect from stage 2 of dementia. At stage 2, they may show minor signs of forgetfulness like misplacing items or forgetting details. However, people tend to forget things even when they are healthy, so it can be challenging to ascertain whether dementia is why it is happening. Even for people at an elderly age, forgetfulness from memory deterioration is expected. However, if these signs of forgetfulness become worse and more frequent, it is likely time to get it checked out by a doctor.

Around stage 3, there may be a mild decline in cognitive functions that may cause your loved one trouble focusing on even simple tasks. This may be the case even with tasks that they are familiar with, like doing simple paperwork at their job. However, the cause for this could be other reasons like lack of regular sleep or depression. Therefore, eliminating these possibilities is crucial before assuming that they have dementia.

At stage 3, because of a decline in cognitive functions, they may have trouble solving simple problems. This can make going to their jobs difficult as they will have difficulty dealing with their work. Additionally, you may see them struggle at home trying to figure out a recipe or follow their monthly bills. This can be quite a stressful ordeal for dementia patients.

Because of the previous dementia signs and symptoms we discussed, dementia patients tend to feel like something’s wrong with them. This may be the case, especially if they are struggling to hold a conversation. These problems make it challenging for them to handle work and social situations, which can result in them slowly withdrawing. Eventually, this withdrawal can lead to depression, which only worsens this condition.

Social withdrawal and cognitive decline may result in changes in their mood and personality. They may show signs of suspicion, anger and anxiety that may worry you and even hurt you. At times, they may even make poor judgment calls or act up. While this may seem intentional, you have to remember that someone going through dementia does not act on their own accord. After all, they can only act the way their brain is equipped to do so.

If you see a culmination of all these signs, get your loved one checked. The earlier dementia is detected, the earlier doctors can take action to prevent and heal it.

What are the signs of dementia for each type?

Now that you have understood the early signs of dementia in general, we will look at the signs for each type in particular. 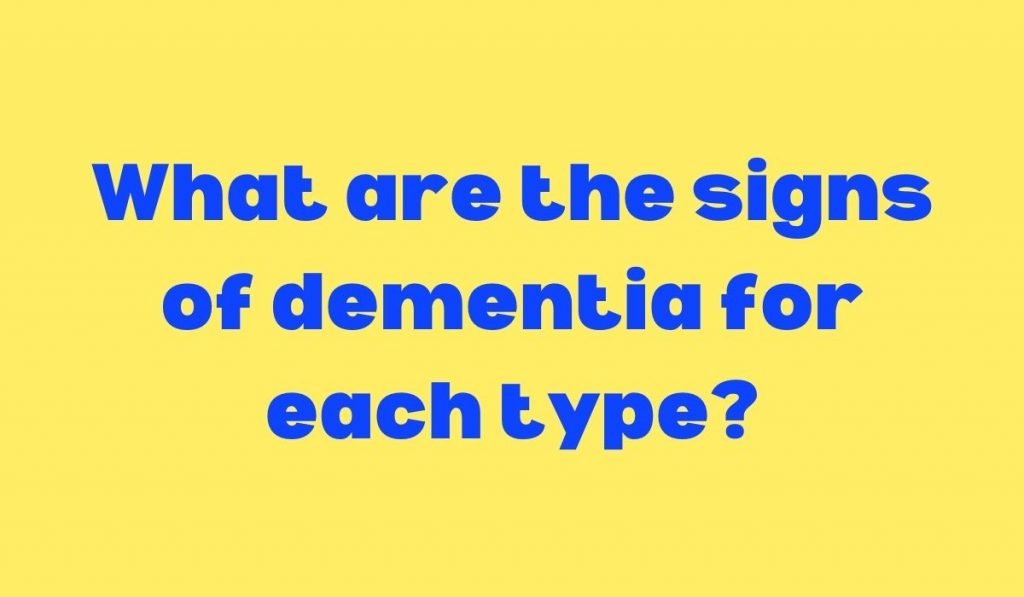 Alzheimer’s disease is the most common cause of dementia and is often considered a synonym for dementia. It is especially common in people under the age of 65.

Vascular dementia is the second most common cause of dementia after Alzheimer’s. The symptoms for this type of dementia are generally similar to Alzheimer’s, although memory loss takes longer here. Additionally, there are other symptoms like:

This type of dementia also shares many of the symptoms that Alzheimer’s disease has. Additionally, people with Lewy bodies dementia may have the following additional symptoms:

What are the possible complications of dementia?

Dementia is a condition that affects millions of people worldwide. It can be caused by various conditions, such as Alzheimer’s, vascular dementia, and Creutzfeldt-Jakob disease. While there is no cure for dementia, understanding its possible complications is essential to provide better treatment and care. Let’s take a closer look at what these complications are.

One of the most common physical complications of dementia is weight loss. Individuals may need to remember to eat or feel more motivated as the condition progresses. This can lead to malnutrition, which can further exacerbate other symptoms of dementia and even increase the risk for developing infections. Additionally, some forms of dementia may cause difficulty swallowing or chewing food, making it difficult for individuals to consume enough calories.

Another physical complication is falls and fractures. Due to confusion or impaired motor skills, some individuals with dementia are more likely to fall and sustain an injury than those without the condition. Some studies have found that individuals with moderate or severe dementia are four times more likely to experience a fall than those without the disease. This can lead to severe injuries such as broken bones or head trauma that require medical attention and extended recovery periods.

In addition to physical complications, those living with dementia may also experience behavioral changes due to their condition. For example, some individuals may exhibit increased aggression towards others or become agitated quickly when provoked—a phenomenon known as “sundowning” due to its tendency to worsen in the evenings. Other behavioral issues, such as wandering off unsupervised, can also arise due to memory problems associated with dementia.

One of the most common symptoms of dementia is cognitive decline. This may include short-term memory loss, difficulty concentrating, poor decision-making skills, and changes in language and communication problems, including rational thinking sometimes. As the condition progresses, these symptoms can become more severe and impede daily activities. It is essential to recognize these changes early on in the diagnosis of dementia, so they are managed with proper treatment.

Mood swings are another common complication of dementia that can affect both the person living with dementia as well as their family members and caregivers. Mood swings may include sudden changes in feelings such as sadness, fear, frustration, anger, or confusion. It is essential to recognize these mood swings early on so they can be managed appropriately through support systems and other interventions focusing on maintaining the quality of life while managing the condition effectively. Providing proper senior care services is the best solution for this medical problem.

Dementia is a progressive disease culminating in various conditions that can negatively affect the brain. Therefore, recognizing dementia early is crucial, and you can only do this if you know of the warning signs to look out for. We have discussed all the signs and symptoms of dementia, whether they be general symptoms or symptoms of each type.

Many of these symptoms can be distressing to see in your loved ones, which is why we recommend being patient. This is because a person with dementia cannot control what they feel since their brain is being directly affected. We hope this helps you understand the warning signs so that you can help your loved one who has dementia before it gets too late. If you see any of these dementia symptoms, consult a doctor and medical professional immediately for prompt treatment.